Hi I'm Dugdawg of guild Basilica. I hope this guide helps out all you Clashers. Thanks to Rankdog for facilitating this posting.

HBD - Guide to beating every Demon boss. (This guide will be updated as new heroes become available)

General Overview of HBD
There are four types of demon bosses: huge single-target damage, stun, deflect and damage reducing demon. Each Demon can appear with mobs such as Vlad, Tard (Minotaur), AC and Molt, and they have varying amounts of health. Players with higher might will face tougher demons who have more health and do more damage.

Depending on what demon you get, you may want to swap in and out heroes and pay special attention to your partner's heroes. Here are some suggestions on what and who to use for each boss.

Stun Demon:
The biggest danger of stun demon is he can proc almost immediately, and his AOE stun does massive damage and can wipe a team. The preferred way to counter this is to have a high revitalize Aries on your team or your partner's team, as this will prevent the stun proc while your other debuffers work to get the demon under control.

If you have a high level Death Knight, particularly one with revit, he's also the way to go as DK will shield your heroes from the Demon's stun once he procs, which allows your healers to keep healing and mitigate his damage. A healer like Orcsbane that can heal through stuns is good but not a must. A good tank and debuffer like Moltanica is a good choice for taking hits from the demon. Santa also can be a good debuffer for stun demon but beware of his energy generation as this can lead to the demon proccing more. For people who use Santa, usually they recommend having a Santa on each team (there's something about double Santa that just works here).

Other heroes that are helpful are frost witch (she slows down his attacks and limits his procs) and Shaman (he reduces the damage from the Demon's proc. A team with frost witch, pixie and high scatter can easily defeat this demon by preventing the demon from proccing. Having a revitalize Aries somewhere in the mix tends to remain a good safety measure.

Deflect Demon:
If this demon procs, it's usually game over, as your heroes will destroy themselves. Your secret weapons here are Pixie and Frost Witch combined with a team with lots of scatter. Once again having a high revitalize Aries can be helpful here so as to prevent this demon from applying his shield. Scatter Harpy also is good for this demon, as her debuff proc combined with scatter from ordinary attacks help keep the demon from applying shield. Moltanica makes for a good tank and debuffer as usual, particularly one with scatter. I normally tell people to remove Santa from the mix here because his energy generation on Deflect demon can be disastrous. The same goes for Vlad and other AOE heroes.

High Damage Demon.
This demon's proc does massive damage to a single hero, usually resulting in instant hero death. Attempts to debuff this demon's damage with Shaman or Succubus don't seem to work because the damage is tied to the demon proccing.

As with the other demons, a high scatter team with Pixie can help prevent this demon from proccing. I generally recommend tanking this demon with AC because so long as AC's shield is active the demon won't be able to one-shot him. Moltanica also makes for a good tank.

A Treantaur with revive is great for this demon because as the demon kills heroes with his proc, tree can revive them right back up. I recommend using Aries to try and prevent the Demon's proc as well as Frost Witch to reduce the number of times the demon procs. Santa can be good for slowing down attacks and piling on damage but be aware of his energy generation.

Reduced Damage Demon
By far the easiest demon, but he has lots of health. You want to keep his shield off, and to do that a Pixie and a team with lots of scatter is great. Aries is also good for preventing the shield. Frost witch is recommended to slow down the demon and reduce the number of procs.

Some thoughts on scatter:
Scatter can be applied to your team through crests or via your heroes' main talent. A good scatter team involves having scatter 3/5 or higher on all the members of the team via talents or crests, although sometimes you can get away with less when a couple heroes have high scatter or if you have a Pixie. Pixie is a great hero for demons because of her innate 5/5 scatter, which when combined with her ability to remove buffs is a great combination for all demons.

If you are setting up a HBD team for people to borrow, then you should setup your heroes with your tanks etc positioned towards the bottom right corner tiles. That way the demon will hit your tanks first and not your healing or support heroes. Don't leave your heroes positioned toward upper left tiles if you are setting up your team to be borrowed because it may take them too much time to reach the demon, which doesn't do the person borrowing them much good. Cross setups, like those shown in the pictures are good borrowing setups for stun and deflect demon respectively.

If you are setting up your own HBD team for attacking the demon and borrowing someone else's heroes, then you should setup your tanks facing the upper left tiles instead, with your healers, debuffers (frost witch etc) positioned towards the lower right tiles (in the back).

Now comes the decision of which set of heroes (yours or the person you're borrowing heroes from) you want the demon to attack first. In some circumstances, you may want the demon to attack your friend's heroes first - perhaps because they have tankier heroes or better debuffers or because you have a certain hero that you need to survive long enough to proc to get the demon under control.

In this case, you may want to position your heroes further away from the demon (I.e., closer to the lower right tiles instead of the upper left tiles). The demon will always attack whichever set of heroes is closest.

It can be helpful to experiment with having the demon attack your friend's heroes first, as sometimes it can make a big difference.


Enclosed are some pictures of good HBD hero setups for borrowing: thanks to Magic Mike, CaptainShaft, and Cydeout of guild Basilica. The first picture is a good stun demon borrowing setup. The second two are for deflect demon. 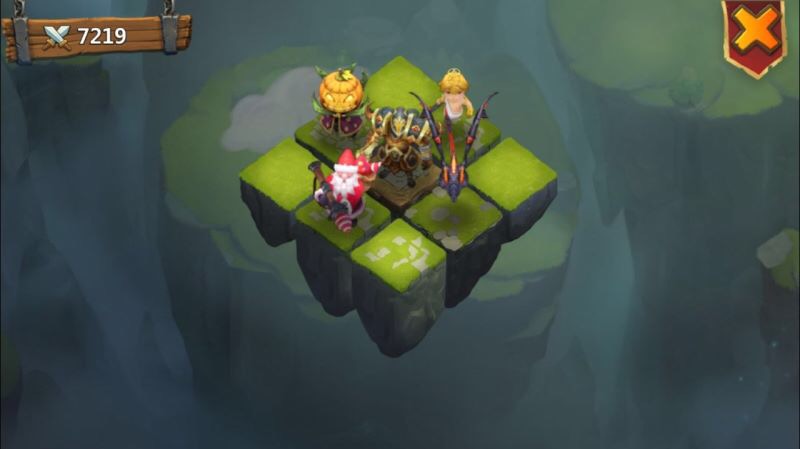 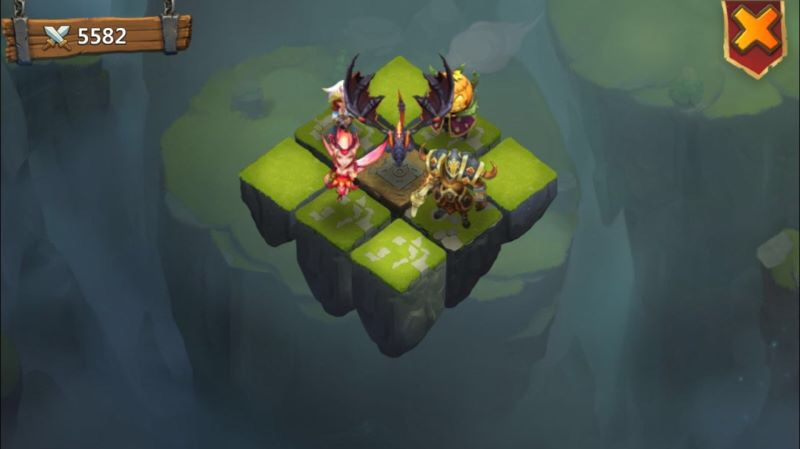 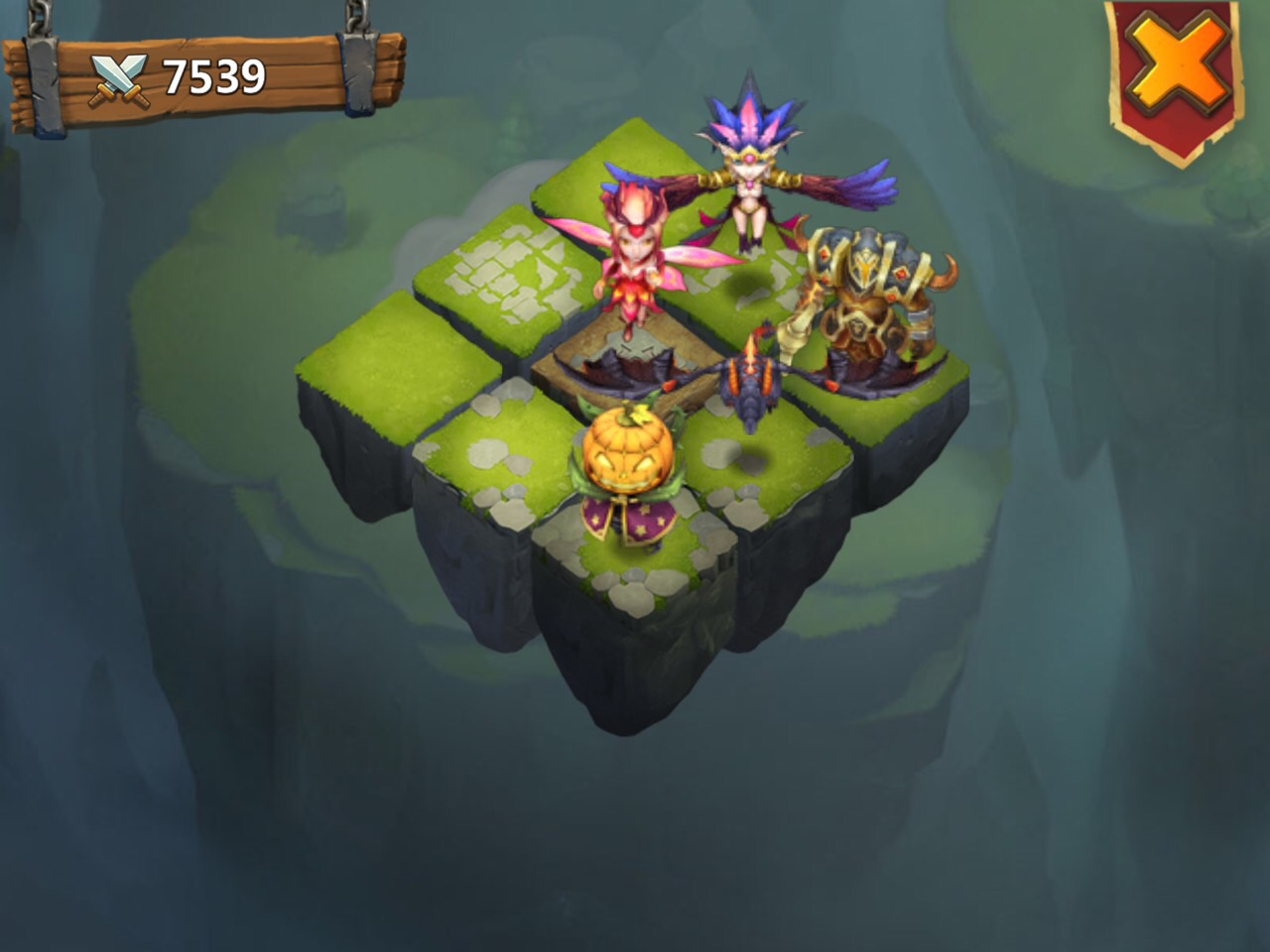 One note on the Scatter Harpy.  Unless she works differently than all other CC heroes, the Scatter does not get applied to her proc hits.  That leaves you with a Scatter every 1500ms.  So you should probably strike this phrase "as her fast attacks help to stack lots of scatter".

DUGDAWG Rated on 11/13/15 12:08:03 AM
Good point - scatter harpy seems to work based on the combination of her debuffs associated with her proc combined with the benefits of scatter. But as you point out her proc itself doesn't cause scatter just normal attacks. Her actual normal attack speed is slow, but scatter harpy nevertheless seems to be good on demons

You may also want to mention Crests. If you did I may have missed it.
Having Scatter and SlowD crests works well for the average player.  You will get the enough damage if you don't die.

It's always to good to see helpful posts.

DUGDAWG Rated on 11/13/15 12:09:24 AM
Yes, I didn't overtly say it, but when referring to scatter, I was also including scatter provided by scatter crests

Signature
Madness is my thing and the epicness that follows.
Line ID: be-epic

Hi everyone, I've updated the guide based on corrections pointed out in your comments as well as other information I wanted to add about scatter and hero positioning. Enjoy.

This is a very good and informative guide dug, great work.

Signature
Wesvaroth of 7Seas on iOS

Good info. Thank you for your post. I think it would be useful too that you add what heroes we should use and crest too. I used to use AC all the time to tank Demons but now i am using Molt + HQ.

Good info. Thank you for your post. I think it would be useful too that you add what heroes we should use (or his alternative) and crest too. I used to use AC all the time to tank Demons but now i am using Molt + HQ.