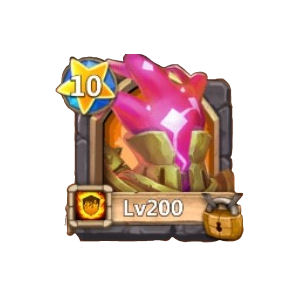 Hi Guys and welcome to a new series called Hero Focus!!!
This series is designed to offer a baseline for popular Hero builds and to help players decide on where to put Talents, Crests/Insignias, Traits and all the goodies to get their Hero to a level where they will do some good.
Each week a new Hero will be selected by a small group of players to focus on and provide a suggestion as to what to do with them.
This is not an end game or definite top suggestion, merely a starting point.
This is an open discussion where players can add their builds and discuss how they use their Hero also so feel free to post and comment below.
This data was compiled with the minds of NikkoTate, BNKV and Hanyabull from iOS and Rusty/Fe2O3 from Android. This information is to be used as a starting point and not to be taken as the absolute best end-game combination


Part1: Areas of Use

Storm Eater is best used in PvP (Player vs Player) modes such as Los Realm, Lost Battlefield, Arena and Labyrinth if paired with a high Revitalize Talent or Crest.
Some players also use him on Guild Wars Defense on some base designs but only on rare occasions.

The Talent we have chosen to showcase is Flame Guard.
At 8/8 this Talent will deflect 45% of damage taken and as you can see from his baseline stats, his HP is a mere 304,638 at Level 200 Double Evolved which will help keep him alive long enough to get his first proc off.
I have chosen to showcase this Talent over the many that we discussed for this reason.
**A few other builds include Bulwark, Wargod and Empower.
StormEaters main use is to stun enemies at the beginning of the fight and as he is an Auto Proc Hero he is best paired with Revitalize 5 or 4 as his Crest/Insignia.
This ensures he will Proc first and give you the advantage you need. 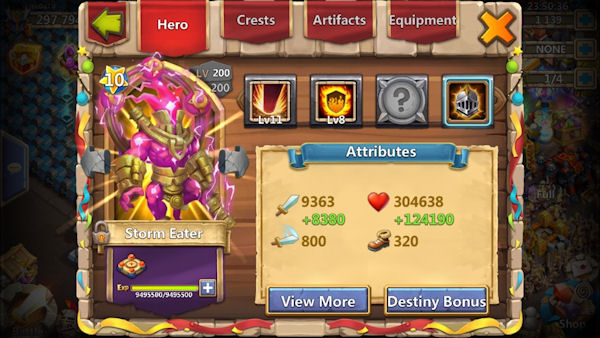 For the purpose of this series we have decided to showcase HP (Hit Points) and ACC (Accuracy) as his Traits.
The reason behind this is many players use Dodge Traits on their Heroes and Accuracy Traits can counter those to ensure your attacks hit their target.
HP was also chosen due to his low baseline stats allowing him to take more damage from incoming attacks.
The screenshot shows an even mix of HP and ACC Traits.
Each level 5 of HP will add 15,000 to your Hit Points
Each level 5 of ACC will add 975 to your Accuracy 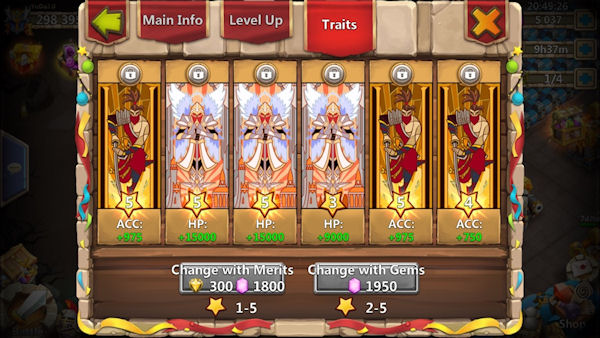 The Enchantment we have chosen for the purpose of this build is Victory Lunge.
While the screenshot below only shows a Level 2, Victory Lunge at level 5 will increase your Hero's Attack by 25% and reflect 15% of incoming damage. This is a great combination with Flame Guard as you will Deflect 45% and 15% respectively (not combined for 60%) back on to your enemies.
This will help aid in Storm Eaters low HP factor and help in removing enemies faster. 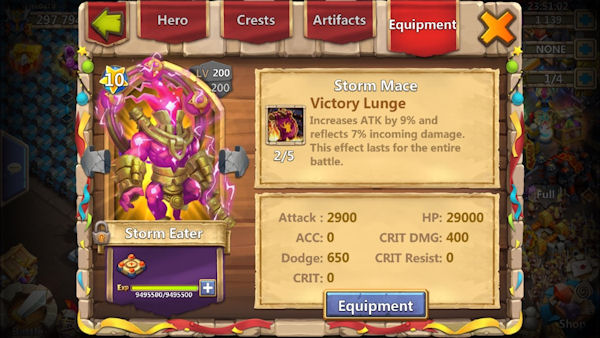 In conclusion this build of Storm Eater works really well, however it relies largely on the Revitalize 5 Crest/Insignia and getting the first proc.
We are very interested to hear your feedback and a breakdown of your current Storm Eater build and hear how it works for you.
Again this is NOT the definitive, only way to build this Hero.
This is an open discussion and We would love to hear from you all.

Thanks for your time,
The Hero Focus Team
Rate Delete Ratings
Manage

In my opinion, Stormy is also excellent in GW offense, in particular against dragons.   A lot of people hide Skeletica behind a wall and relatively alone.  A group of heroes led by revite 5 Stormy can break that wall and have Stormy stun the dragon.   Once stunned, dragon often becomes easy prey.

I haven't tried Stormy on Lavanica, but I tried it on Molt and Skelly, and had good experiences.   I know Dove has a reputation as dragon slayer, but I think Stormy deserves it as well, maybe even more.