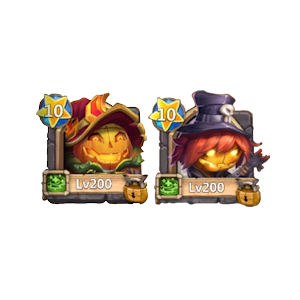 Hi Guys and welcome to a new series called Hero Focus!!!
This series is designed to offer a baseline for popular Hero builds and to help players decide on where to put Talents, Crests/Insignias, Traits and all the goodies to get their Hero to a level where they will do some good.
Each week a new Hero will be selected by a small group of players to focus on and provide a suggestion as to what to do with them.
This is not an end game or definite top suggestion, merely a starting point.
This is an open discussion where players can add their builds and discuss how they use their Hero also so feel free to post and comment below.
This data was compiled with the minds of NikkoTate, BNKV and Hanyabull from iOS and Rusty/Fe2O3 from Android. This information is to be used as a starting point and not to be taken as the absolute best end-game combination

Pumpkin Dukes main areas of use are Raiding, Expeditions, Storm Mesa/Lava Isle, Wretched Gorge/Infernal Summit,Castle Crisis, HBM and of course Dungeons!!
His main use is to buff the Attack Speed of all the other Heroes on the Battlefield to ensure that the Area you are using him is completed within the time limit. He is also very useful in PvP Gamemodes such as Lost Battlefield and Arena.

The Main Talent we have chosen to showcase is Regenerate.
At 8/8 this Talent will raise Pumpkin Dukes Energy recovery by 100% and his Healing by 100% but only from basic attacks. This works much the same as Berzerk in the sense it helps speed up his proc which is the main purpose of using him and helps him heal more when accompanied with a Healing Hero.
There is a few other combinations we discussed but we chose Regenerate as it is a newer Talent and many of you may be looking for a place to store it.
**Other Talent combos that were discussed were Empower/Life Drain, Stone Skin/Revitalize and Berzerk/Empower.
As Pumpkin Dukes main focus is to buff Heroes as soon as possible, we have decided to showcase his Insignia as a Revitalize 5 or 4 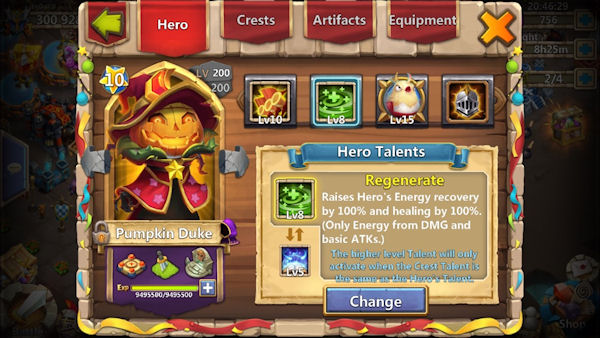 As Pumpkin Duke has low HP and he is necessary to keep alive in Modes such as Castle Crisis, HBM and ArchDemons, we have decided that his preferred Traits for this set up is CRIT RESIST (Critical Resistance)
What this does is give a higher possibility to negate any Critical Attacks thrown at him from enemies and help aid in keeping him alive for the end of the match.
We chose these Traits over Dodge as this Talent works best when being attacked, if we had used a high Dodge build then the Talent would become void. Dodge would work well in builds that include Empower as Empower gives Energy regardless of the situation.
You could also go half CRIT RESIST and half ACC to counter any Dodge Heroes you might face.
The screenshot shows full CRIT RESIST Traits.
Each level 5 CRIT RESIST will add 135 points to your Critical Resist stats 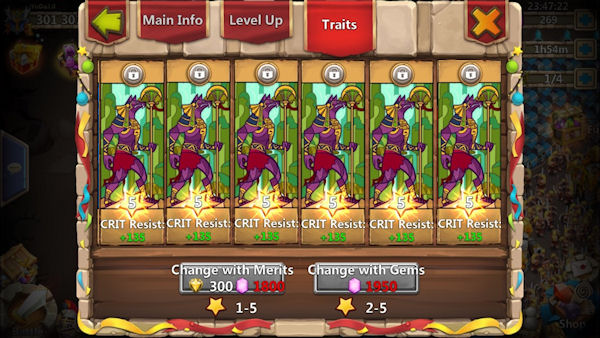 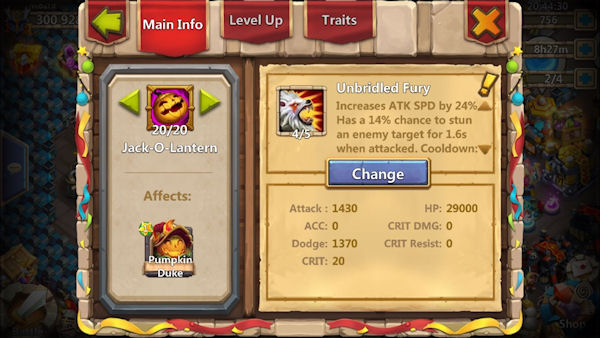 In conclusion this build of Pumpkin Duke is great for keeping him alive longer than the mainstream builds of Revitalize or Berzerk without losing too much time getting the initial proc off.
We are very interested to hear your feedback and any other builds you have that work well for you.
Again this is not the "be all and end all" build, this is just our opinion and input to help the community.

Thanks for your time,
The Hero Focus Team
Rate Delete Ratings
Manage

Well for me zerk is still awesome unless you are some spenders.

Pocay Rated on 8/6/18 11:57:40 PM
First of all, thank you so much for the hard work. I am currently streaming and leaving comment with my fam in the stream.

Tee_Dubya Rated on 8/8/18 11:38:26 PM
Running regen with empower 5 crests seems to provide best sir i ability for him. Traits I used combo Accuracy and dodge

Eucratidee Rated on 11/14/18 4:43:12 PM
8 zero with 11 skill and lvl 7 regen crest is beastly also all dodge traits idk why u went crit resist as survival isn't his main issue anymore due to the newer heroes like cirrina

Signature
When you roll 50K gem for a paladin.

Great guidance bro. Really help me very much. Cant wait to see ur next hero review. Keep up bro.

IW crest at any level is great for dungeons.  It pretty much makes most of the current dungeons a lot easier, up to 6-10 insane.  With a good Anubis or Esprita the board will mostly like be a ghost town after 10 seconds and a skill 11 PD should help any team clean up the buildings.

Thanks for doing this!

iYoDa2point0 Rated on 9/18/18 5:45:32 PM
Thanks clasher!! I actually enjoy doing the research and discussing with the team different ways for different heroes to work. Always make it all feel worth it when we hear good feedback!!