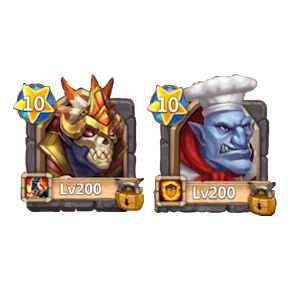 Hi Guys and welcome to a new series called Hero Focus!!!
This series is designed to offer a baseline for popular Hero builds and to help players decide on where to put Talents, Crests/Insignias, Traits and all the goodies to get their Hero to a level where they will do some good.
Each week a new Hero will be selected by a small group of players to focus on and provide a suggestion as to what to do with them.
This is not an end game or definite top suggestion, merely a starting point.
This is an open discussion where players can add their builds and discuss how they use their Hero also so feel free to post and comment below.
This data was compiled with the minds of NikkoTate, BNKV and Hanyabull from iOS, Rusty/Fe2O3 and Ollie/ojdiaz from Android and Pocay from YouTube This information is to be used as a starting point and not to be taken as the absolute best end-game combination

Walla Walla will become a part of every team you will use from whichever stage of the game you are at.
From a brand new player just rolling him to an end game veteran who will have several builds for several game modes, "Wally" will be a Hero you will never place on the bench!!
Not only does he heal your Heroes, he lessens the amount of healing the enemies can have, removes any debuffs from your Heroes and increases their Attack. He's also immune to Aries' Calamity Skill and any form of Silence from any other enemy Hero.

This week we are going to propose 3 different Builds as opposed to the previous builds.
These builds will be focused on Beginner Players, PvP (player vs player modes) and End Game.

Beginner:
Walla Walla will become your main Healer once you obtain him. He will more than likely replace rather than accompany Ghoulem or Druid and for this reason you will want a Talent/Crest combo that will keep him alive and help him proc as many times as possible.
We would recommend the following:
Talents: Flame Guard, Stone Skin, Tenacity.


Flame Guard will reflect 45% damage inflicted onto Walla at 8/8, thus helping him stay alive.
Stone Skin will reduce the amount of damage he takes initially by 60% at 8/8, again helping him to stay alive.
Tenacity will increase his HP by 100% at 8/8 which again will help keep him alive.


Empower will grant him energy every second the battle is LIVE, even if he is standing there doing nothing and because he is an auto proc Hero, he can defend your base or team without even battling.
Any combination of these Talents/Crests is a great starting place until you decide how you want to use him.

PvP (Player vs Player):
Player vs Player is very situational but a great starting point is always going to be either an offensive or defensive main Talent with Revitalize Crests.
Revitalize is always going to be essential in PvP modes as you want all your Heroes being the first to proc.
The main Talent we chose as a group is Flameguard, purely for the Deflection against AoE Heroes. The 45% you get from 8/8 is nothing to be sneezed at. In our opinions (collectively), Walla is not the sort of Hero you would put Offensive Talents on like Wargod or Brute Force since his attack is not overly strong to begin with.
The benefits from defensive Talents outweigh the benefits from Offensive Talents, in our opinion.

End Game:
There was a lot of discussion about this and the general consensus we came to is that Sacred Light is Walla Walla's EndGame Talent.
at 8/8, Sacred Light at 8/8 will increase his HP by 65% and reduce his damage received by 50%.
At this level of play you can expect every base or gamemode you play to have an extremely deadly Dovekeeper and Walla will more than likely be the lowest HP Hero on your team but with Sacred Light you can now ensure he is not the first Hero targeted so he can get into the fight worry free.
Teaming this up with Empower Crests/Insignia can mean he can stay at the back of your team and keep debuffing the enemy over and over without being an easy target for Dovekeeper and the likes. 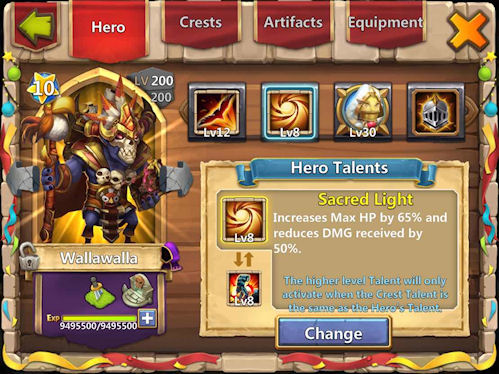 Again we are going to offer 3 builds for the Traits section in this issue and discuss why we have chosen them.

Beginner:
As a beginner player you will want to either raise his Attack for damage or his HP for survivability.
You may also decide to go the route of Dodge which will have more or less the same impact for survivability.
We suggest the following:
A mixture of HP and ATK Traits or a mixture of Dodge and HP Traits. Anything around the Level 3 mark will suffice as a beginner player and as you progress these may end up being changed anyway so there is no need to use Gems at this stage to aim for a full Level 5 Trait build. Something like this will be fine.

Player Vs Player:
As most PvP matches are over in seconds rather than strategy, you will want to focus more on damage to end the fight as quickly as possible or using as much Dodge as possible to avoid being hit altogether.
We were split on this decision but ultimately we recommend Dodge. Dodge will ensure you can keep attacking and stay alive at the same time.

End Game:
Endgame was an easier discussion as most of the team is at this stage already.
HP or Dodge Traits were chosen for this showcase, HP to ensure he is not the lowest HP Hero on the battlefield and avoid Dovekeepers attack on top bases (she targets the lowest HP Hero) and being that Walla is more than likely your only Healer in your line up, you want him alive as long as possible.
Dodge for the same reason, if you can help him avoid being hit altogether you can help him stay alive longer. 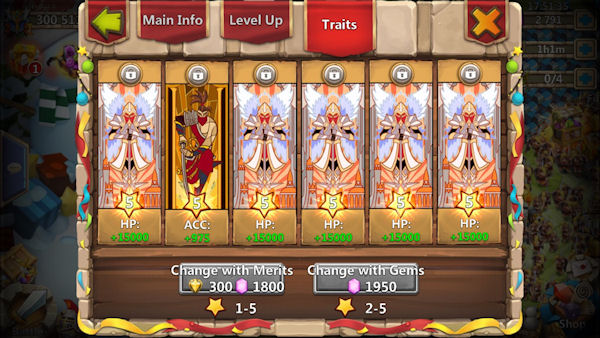 There is no need to discuss 3 levels of Enchantments as we decided on Forest Ward.
At level 5, Forest Ward has a 30% chance to remove ALL conditions and restore 30% HP when Walla is attacked.
This means that he can resore his HP more than his Proc and give him even more of a chance to stay alive.
Forest Ward has a cooldown of 8 seconds. 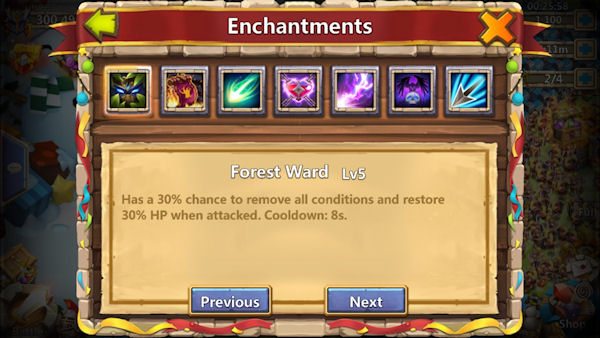 In conclusion, Walla Walla will always become your final Healer and be a permanent fixture on your Team for almost any mode.
As long as he has the HP to stay alive and the Talent to assist in that, he should be able to do his job better than any other on your team.
And as always, this is not the "be all and end all" Build of this Hero, just our suggestion.
We would love to hear your feedback on anything we can change in the upcoming Hero Focus series.
Rate Delete Ratings
Manage

Great overview. Now im start to build mine for end game. Thank you

iYoDa2point0 Rated on 8/18/18 10:42:31 AM
Youre welcome mate, just trying to shed some light for all the players who are undecided on the route to take