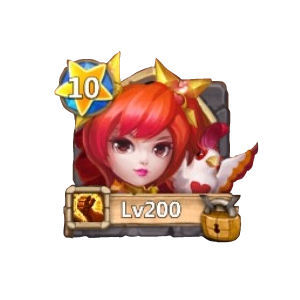 Hi Guys and Girls welcome to this weeks instalment of Hero Focus!!!
This series is designed to offer a baseline for popular Hero builds and to help players decide on where to put Talents, Crests/Insignias, Traits and all the goodies to get their Hero to a level where they will do some good.
Each 2 weeks a new Hero will be selected by The Hero Focus Team to focus on and provide a suggestion as to what to do with them.
This is not an end game or definite top suggestion, merely a starting point.
This is an open discussion where players can add their builds and discuss how they use their Hero also so feel free to post and comment below.
This data was compiled with the minds of NikkoTate, BNKV and Hanyabull from iOS, Rusty/Fe2O3 and Ollie/ojdiaz from Android and Pocay from YouTube This information is to be used as a starting point and not to be taken as the absolute best end-game combination

Part 1: Areas of Use

Dovekeeper is one of those Heroes that has many uses. Her main use and focus for this weeks installment will be on Offense.
She can be used as a "sniper' for Raiding, Guild Wars etc etc and can be the last line of defense in Lost Realm, Labyrinth etc etc.
She is a strong Hero and thus we will focus on her Offensive uses and offer a few different level builds for her.
Her main point of interest is the 18,000 damage cap she comes with, this means that no matter how strong the opposing Hero is she will only ever take 18,000 damage from each attack which gives the player a great advantage in nearly every mode of Castle Clash.
Clicking This Video, courtesy of Ollie, you can see how she is not really a defensive Hero.
Here Ollie uses her doves to create a "Mino Bomb" with a Ronin Cleanup by drawing out her doves with some troops, dropping Mino and Cirrina and then sending out Ronin to finish up.
For this reason we recommend you not use her in Guild Wars on defense.

In this section we will offer 2 different builds, one focusing on PvP and the other focusing on End Game.
Both can be modified to suit your personal playstyle and as always this is just our suggestions!!

Dovekeeper will be your main focus once you gain her because of how strong she attacks and her Damage Cap.
In PvP modes her main use is to do as much damage to as many Heroes as possible to help the rest of your team. Usually you will place her in the back row of your lineups to ensure she is the last line of Defense.
Talents:Wargod, Bulwark, Brute Force

Crests
Life Drain will help her survivability and quite simply put, make her a pain in the bum to kill. I have had many matches time out from a Life Drain Dovekeeper healing herself more than I can attack her.
Wargod/Bulwark/Brute Force Any combination of these with the above Talents can cause a lot of damage and chaos on the Battlefield. Remember though, you cant get any gain whatsoever if your Crest/Insignia is the same as your Main Talent.
If you have Wargod Talent and Wargod Insignia, only the one that is a higher level will activate. They do not stack

Talent
Unholy Pact at 8/8 Unholy Pact will increase her attack by 150% but also increase her incoming Damage by 20% but the beauty of this is because of her Damage Cap, she wil NEVER take any more than 18,000 Damage from a single attack!!!!
For this reason we were unanymous on this Talent as her End Game Talent.

Crest/Insignia
Wargod for this build we have chosen Wargod as her End Game Insignia/Crest.
At level 7 it will increase her Attack by 65%. Combined with Unholy Pact and the Critical Damage no longer comes into play as her hits are too strong for 90% of Heroes as it is. And when her Critical Damage does activate, there is nothing that will survive.

Traits is something that will ultimately remain unchanged between PvP and End Game.
We discussed multiple variations such as Dodge and Critical Chance but ultimately they all had a downside.
With Artifacts gone and Dodge easily countered by Accuracy, Dodge quickly becomes a null and void Trait, as does Critical Chance seeing as the build is focused around Damage and the Critical Hits are not necessary with her Damage output.
We ultimately went for a mix between Attack again and Accuracy, Attack purely for more damage output but the Accuracy to counter Dodge Heroes in many players' builds.
In this image below we went a split Attack/Accuracy but if you feel that you dont need any extra attack on your Dovekeeper you could go 4x Accuracy or even 5.
Our thoughts were that there is no pint having all this Damage available if the hits arent going to connect. 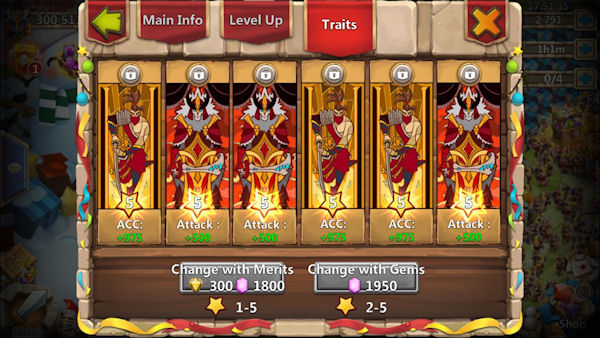 We are going to give 2 options for Enchantments here.
The first being Victory Lunge and the Second being Blinding Blow.
At Level 5, Victory Lunge will increase her attack by 25% and reflect 15% of incoming damage. This works well for survivability and if your main focus for her is Sniping.
Blinding Blow at level 5 has a 25% chance to deal 560% Attack Damage and inflict Blinded for 2 seconds to one enemy Hero when she is Attacked which is perfect if your main use of her is for PvP.
Blinding Blow relies purely on chance though 25% is a high chance in Castle Clash terms.
Both of these Enchantments are focused around Damage also. 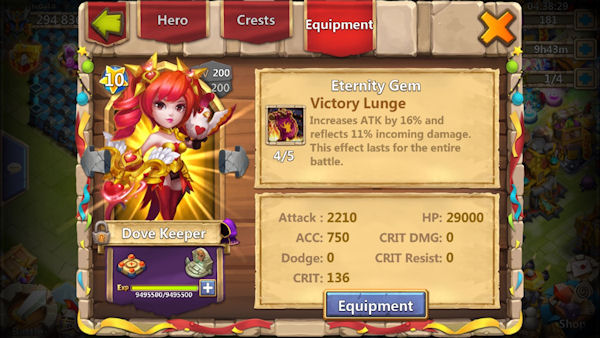 In conclusion, I think its safe to agree that Dovekeeper is a great Hero for Sniping and just plainly dealing multitudes of damage.
She is arguably one of the best Heroes in the game and if built for this purpose specifically, we believe she will be the hardest Hero in your lineup to defeat.
She will be in every Offensive team you have.
Rate Delete Ratings
Manage

I'm still using lots of crit traits once her skin enhancement drops in price I'll get it, grants an additional 250 crit, 25% chance to land one. Using level 7 brute force insignia, 48% damage increase 0.8 more crit damage provided. She's at 1700 crit damage so not too bad. I haven't really had issues landing hits she drops arrows at a fast rate, and at soon to be about 80% crit rate, hurts.

I like to use her in other game modes other than just PVP, where there is less dodge heroes, accuracy not really needed. But if I were to add different traits in, it'd be dodge.

I'm surprised that blinding blow takes the #2 in line enchantment and not energy sap, grants 20% damage increase and reduces targets attack by 5% cool down one second, lasts for 9 seconds. She has a fast attack rate, 800. Blinding blow has 25% chance to land, 9 second cool down.

Bit both builds are fun not saying mine is better, just different viewpoint.

iYoDa2point0 Rated on 9/9/18 5:36:00 PM
Thats the idea of this series, to hear different builds and how they work. Enchantments is not my area of expertise but i know the team discussed a few and settled on that.

iYoDa2point0 Rated on 9/12/18 5:19:51 AM
Thanks guys, all the previous heroes are linked at the top of the thread under “Previous Heroes”. Why not get your Guildies in here to add comments or even suggest who to do next? Generally we have a Hero in mind but if its not what people want to see then no one enjoys the series anymore :)

Dove Keeper is f2p best dmg hero imo. Anubis/Sas 2nd. So beast for early/mid game. Any talent and empower crest for HBM. All sniping and base defense she’s there. Late/end Unholy Pact is crazy. Dove will be around for a minute. Good info on this build btw

Signature
Since the beginning..