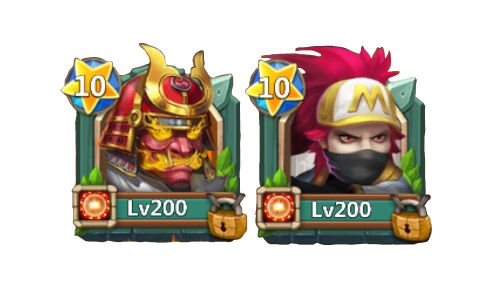 Hi Guys and Girls welcome to this weeks instalment of Hero Focus!!!
This series is designed to offer a baseline for popular Hero builds and to help players decide on where to put Talents, Crests/Insignias, Traits and all the goodies to get their Hero to a level where they will do some good.
Each 2 weeks a new Hero will be selected by The Hero Focus Team to focus on and provide a suggestion as to what to do with them.
This is not an end game or definite top suggestion, merely a starting point.
This is an open discussion where players can add their builds and discuss how they use their Hero also so feel free to post and comment below.
This data was compiled with the minds of NikkoTate, BNKV and Hanyabull from iOS, Rusty/Fe2O3 and Ollie/ojdiaz from Android.This information is to be used as a starting point and not to be taken as the absolute best end-game combination

Ronin is a Hero that does not have many uses. His main use will be in Guild Wars for what is referred to as "Ronin Bombing" or to clean up after "Mino Bombing" but only if built a specific way. These methods will be explained briefly further on in this thread.
His low Hit Points and high Attack make him very squishy and we will discuss a build to help work around that.
You may also see Ronin in Lost Battlefield Defense where his main purpose will be to make the opponents timer run out and cause a loss. However, as I am personally big on getting the community to "scratch each others backs" I would not advise doing this. The more we help each other, the better off everyone is!! 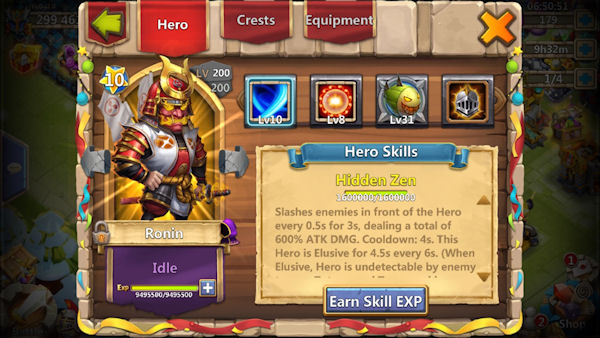 There is really only 1 build for Ronin for him to be effective where hes used. The Talent we are going to discuss is Scorch.
At 8/8, Scorch has a 50% chance to negate all incoming damage.
This means that when he is visible (from his skill) there is a 1 in 2 chance that he will not be hit and this helps him to survive longer and destroy the enemy base from the inside-out.
Seeing as he is only visible a short while this will make it extremely hard to hit him.
You may wonder why we arent suggesting a Damage Talent since he is used to destroy the inside of a base and this is because while he is not Illusive, he is easy to be 1 shot killed from many Heroes including last weeks Focus, Dovekeeper.
Tried and tested, Scorch is the only real Talent for Ronin. 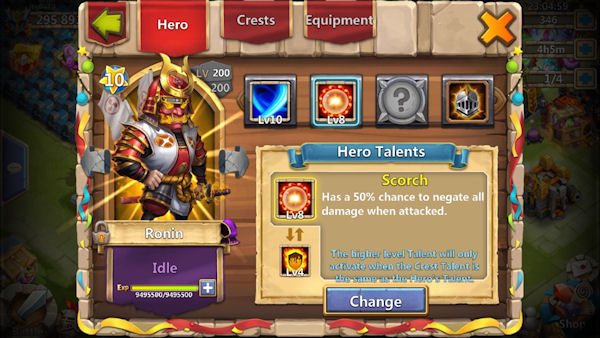 Revive
For the purpose of Ronin Bombing, Revive is a must have. Generally Ronin will work his way inside a base and do his damage there. He will eventually be killed prematurely but with the help of a few extra things (shown below in the video link) you can see having Revive will make things a little bit easier for the 100% victory.
Ronin Bomb Video Link
Basically whilst Ronin is in the center of the base doing work, troops are being spammed on the outside of the base to attract the procs of the enemy Heroes. The Oracle Warden is also healing him at the same time.
Once the base is damaged enough, other Heroes can be dropped to "clean up" for the 100%.
I have used this method myself a few times to some success however it is not as simple as it looks!!

Life Drain
This crest set is mainly used on PvP modes as the gain from using it is less than having Revive on hand.
Life Drain in itself has had a great deal of uses on Heroes over the lifespan of Castle Clash and has always been a solid Talent, but with the release of stronger and stronger Heroes its use has almost been made redundant in the sense that other Talents are optimal and other Crests serve a better purpose.
That said, in modes like Lost Battlefield or even GW defense, a Life Drain Ronin, coupled with Oracle and some great supporting Heroes can be a horror to beat. 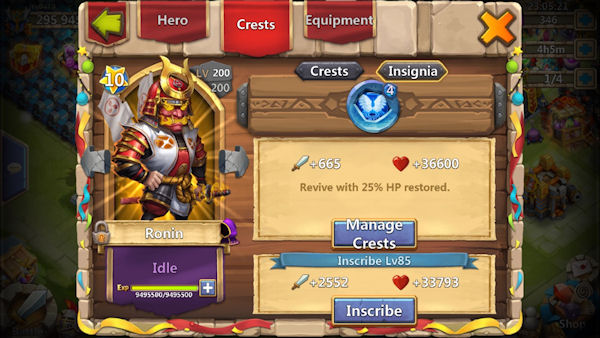 There was really only 1 obvious choice for Traits and that is Dodge.
Whilst it is very easy to counter Dodge with Accuracy Traits, the chances of a team having full Accuracy Traits are very slim and we believe this is the safest option for survivability.
Whilst there is only a very small window for Ronin to be attacked between procs, 1 shot from a Max Damage Dovekeeper is enough to kill him, same with a Skeletica.
For this reason you want him to avoid as much as possible when he is visible to the enemy.
Each Level 5 Dodge Trait will add 650 to your Dodge stats. 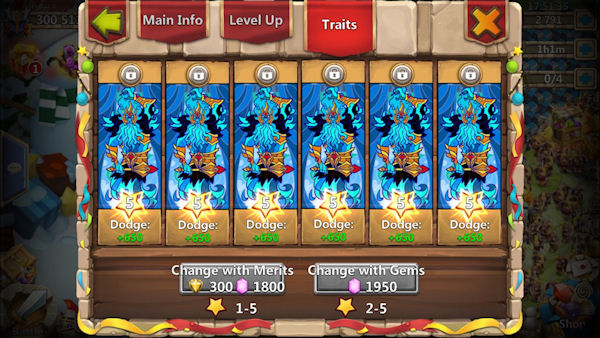 The Enchantment we are recommending for Ronin is Forest Ward.
At level 5, Forest Ward has a 30% chance to remove all conditions (which doesnt affect Ronin) and resore 30% HP when attacked.
The reason we have chosen this is to help in healing as when he is not illusive he can be attacked. In the event that Dodge Traits do not work it is always a good idea to have a back up to keep him alive.
Enchantments like Pyremage that give him a "helper" are not recommended as they can draw the attention of AoE Heroes.
Another Enchantment we discussed was Burning Plate to use for helping to break walls so he can infiltrate the base faster to take advantage of his Illusive Skill.
Either of these is optimal, we dont consider one to to be better than the other.

Whilst Ronin has had many uses over his time in Castle Clash, there is too many other stronger Heroes to use in place of him for 90% of the other game modes out there.
Of course if he is one of the only Heroes you have available then you may even use Life Drain as a main Talent yourself or use a damgae Talent with Life Drain Crests for PvP modes.
Aside from that, at End Game, he may not even be given a second glance but for Guild Wars he is still one of the most fun Heroes to use.
As usual we look forward to your feedback and welcome any criticsm or other Builds you have had success with.
See you in the next Episode
The Hero Focus Team
Rate Delete Ratings
Manage

Isnxisnx Rated on 9/29/18 5:17:28 AM
A life drain is imo the better way for ronin, instead of that revive. Back in the days of artifacts it was the mini angi who could let him alive too, and now with those wardens,

iYoDa2point0 Rated on 9/29/18 6:23:54 AM
Thats a good point but in crest form the Life Drain doesnt heal enough against Heroes like Dovekeeper who can one shot you, this means that when you arent illusive you instantly die, with Revive you at least get another round of being illusive and destroying more so that Mino or Dread Drake can clean up for you.

iYoDa2point0 Rated on 9/29/18 6:24:41 AM
Also we havent discussed pets but that seems like a great idea to add to the future series and edit the current series with