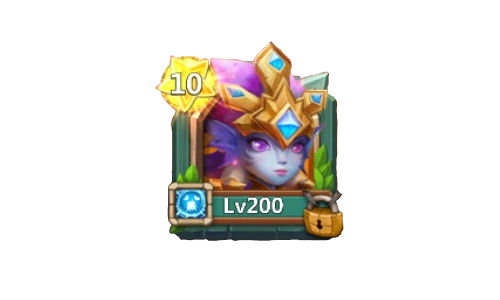 Hi Guys and Girls welcome to a special instalment of Hero Focus!!!
This series is designed to offer a baseline for popular Hero builds and to help players decide on where to put Talents, Crests/Insignias, Traits and all the goodies to get their Hero to a level where they will do some good.
Each 2 weeks a new Hero will be selected by The Hero Focus Team to focus on and provide a suggestion as to what to do with them.
This is not an end game or definite top suggestion, merely a starting point.
This is an open discussion where players can add their builds and discuss how they use their Hero also so feel free to post and comment below.
This data was compiled with the minds of NikkoTate, BNKV and Hanyabull from iOS, Rusty/Fe2O3 and Ollie/ojdiaz from Android.This information is to be used as a starting point and not to be taken as the absolute best end-game combination

Siren is important for the Archdemon because her skill will make the Archdemon take more damage.
At 10/10 she will deal 380% Attack damge to 9 enemies in front and increase their damage taken by 34% for 5 seconds with a 5 second cooldown.
This means the Archdemon will now take 34% more damage from all of your Heroes for 5 seconds.
She also has an inbuilt 5/8 Slow Down so she helps with the "Slow Down Method" explained in the "Beast Tamer" Hero Focus.

As with Beast Tamer we are only offering one Talent choice specifically for the Archdemon.
Heavy Blow: Now you might be thinking "the Archdemon can't be Stunned, Heavy Blow is a waste" however, when the Talent activates you will gain more DPS (Damage Per Second) in the form of an extra Attack.
The higher the Talent level, the more frequently it activates.

As with Beast Tamer, Siren will generally be set up 1 way. However, depending on the Archdemon you are facing, there is 2 Crest Choices for this Hero.

Sharpen: At Level 5, Sharpen will increase her Critical Rate by 12% and raise her Accuracy by 11%
This will help towards dealing as much damage as possible by raising the Critical Rate.

The reason we chose Sharpen is for the Critical Rate buff and most of the Archdemons now are immune to Energy Reduction so a secondary option was needed. 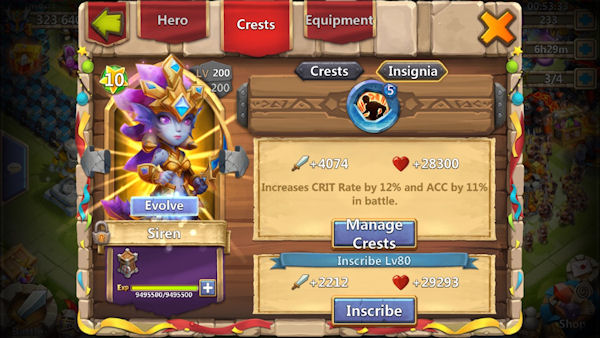 As with Beast Tamer, we have chosen Critical Chance as the preferred Traits for using against the Archdemon.
A Critical Hit is worth more than a standard hit and the more damage you can do on the Archdemon, the higher the rewards will be for you.
If you are strictly Free-to-Play player, Attack Traits can also be ok but Critical Chance is optimal.
Each Level 5 CRIT will add +90 to your Critical Chance. 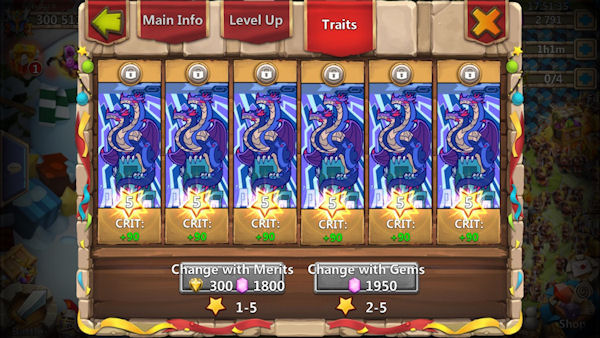 In conclusion, we recommend that Siren be built to maximise possible damage output and inflict as much Damage Per Second as possible much the same as Beast Tamer.
The whole idea of the Archdemon fight is to gain as many Hit Points as possible to win as much Fame as possible which is one of the hardest commodities to build up fast.
Siren is a necessary Hero for the Archdemon because she buffs your whole team by debuffing the Archdemon and can not be replaced by any other Hero.
So start working on your Sirens everyone and get those scores up!!

This week we can genuinely say this is Sirens End Game build, however if you feel differently and want to share your thoughts please feel free to.
We welcome any positive and negative feedback and look forward to hearing if we have helped your Castle Clash experience in any way.
Until the next Episode, thanks for reading.
The Hero Focus Team
Rate Delete Ratings
Manage

iYoDa2point0 Rated on 9/29/18 6:26:40 AM
In Castle Crisis you have 3 game modes before the Archdemon is available. Ember Army, Aviricifier and Impster. I will send some screenshots in a reply 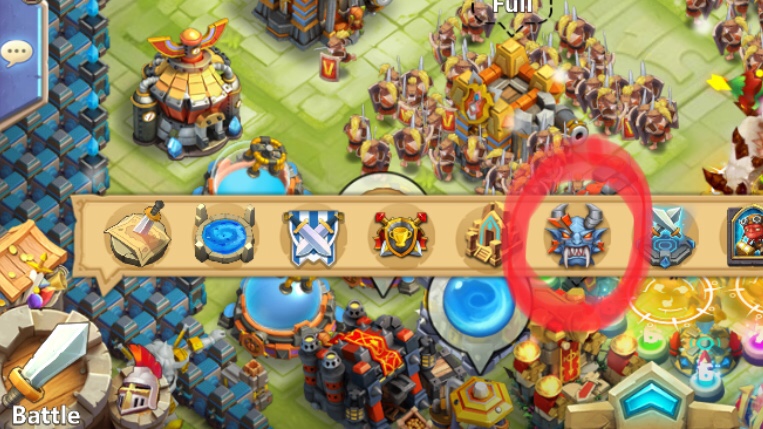 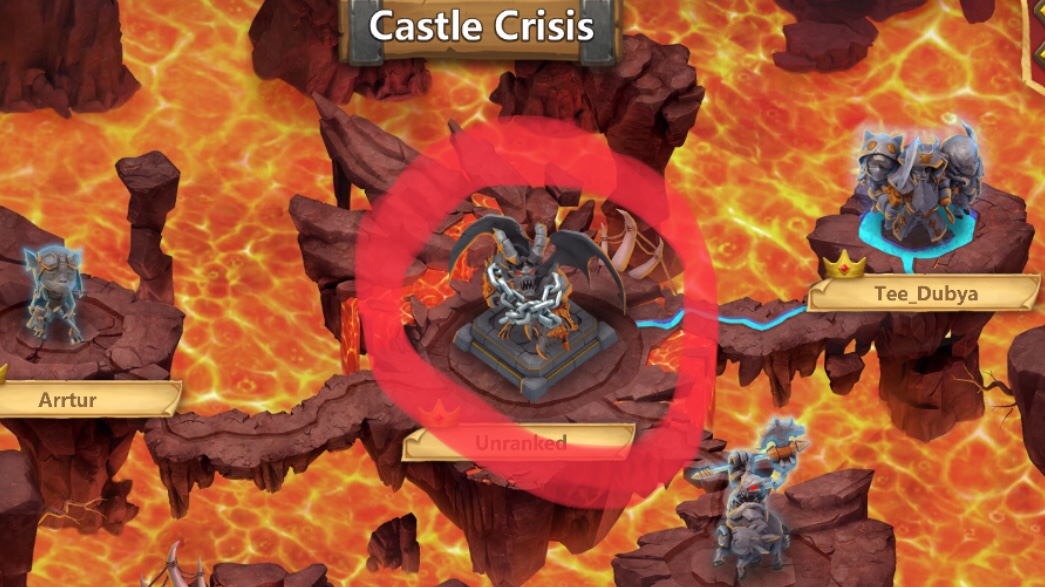 How to kill Skeletica and demogorgon
Please answer the question

In general the writing is not bad. I would disagree in a few points, especially now that we are back to scatter immunity.

I dont see the sharpen/crit build that useful these days unless your account is not very strong. With Regen/Empower PD you quickly buff your heroes always hitting for the 500k cap. So multiplying your damage will be completly useless.

A good option as crest set is deadly strike. While not as high in percentage as slowdown or heavy blow it gives at least a 10 percent chance to double tap. And AD is at certain levels only about hitting more, not hitting harder.

Now with latest update the talent choices have changed again. With Sunder being the top damage talent it is now Sunder main, heavy blow insignia or vice verse the way to go in my opinion.

As for the traits. It is always a gamble to go for only damage/crit traits. While this may lead to slightly higher scores, AD hereos should always follow the 300 crit resistance rule in case we get some auto proc high damage ADs back.

But as usual, just my thoughts and my experiences. Everyone allowed to disagree

i have a regenerate 8 PD and i rarely see 500,000 crit hits when i do archdemon, . i can ask the team to review this and respond though as I merely write it up. These were also written before the new Talents came out and I would imagine as you said it is more about hits than hitting hard.

ArgamonCC Rated on 10/6/18 6:28:41 AM
As said, I can only contribute my personal experiences. If you dont have regen8/empower7 pd things may be a lot different. Also now without scatter (and purrsalot) it is unavoidable that the demon procs. And if he procs his damage reduction increases a lot. So the rules may have changed again. First demon now after the update, we will have further knowledge soon

ok Argamon Im going to try and explain what was relayed to me.

In regards to Crit Traits, we are aiming to increase the chance that your Hero will have a Critical hit, not raise the damage.
Every Critical hit is an extra hit on top of the normal hits.

Deadly Strike works on your Heroes main attacks and not procs and works 1 in 10 times. This is good for damage yes, but if the Demon is Permantly slowed down from ALL your team having enough Slowdown, he will never proc because he will never hit you.
Slowdown is the only option on your Heroes against the "Immune to Scatter" Archdemons for this reason;
We are maximising damage and require certain Heroes to do so. None of the Heroes we are suggesting have the ability to silence in any way and the Heroes that do silence arent used because the total damge output would be greatly lower.

Sunder may be a damage increasing Talent but if you can raise the Critical Chance on the necessary Heroes, a damage Talent becomes void. For the best chance to keep the damage raised you need the Archdemon to never proc, this means either Permanently Scattered or Slowed Down.

The last point, it IS possible to stop the Demon proccing, the Demon is not auto proc so if he can not hit you, he can not proc.
This is achieved by Slowing him down with Ranged Heroes to the point he cant move.
Since he isnt moving he cant attack the first Ranged Hero that you dropped (taking aggro) and thus never procs.

I hope this explains what we were to trying to get accoss.